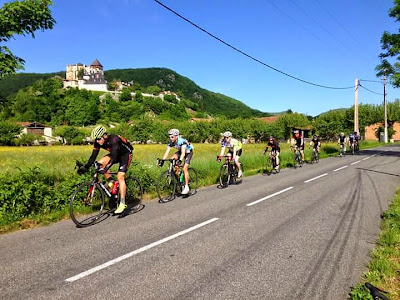 My Triathlon Holiday with Embrace Sports in the Pyrenees.


I arrived at the airport at midday and was friendlily greeted by Eric, Neil and Ali from the Embrace team. I was then introduced to the other 15 on the trip, we jumped in the car and drove for just over an hour  to the farmhouse, chatting about our training and forthcoming events on the way.


The farmhouse accommodation is lovely: very vintage, a big kitchen, good sized rooms, a pool and a hot tub to soak our aching muscles in. We arrived in gorgeous weather, those that brought their bikes built them and those renting were set up on our bikes. I was given a great little bike a Planet X full carbon! We then set off on our first introductory ride, there were some very quick and strong riders, but we naturally broke into two groups. The ride was sunny and flat and with only very small hills to warm us up for the mountain the next day. The 18 mile cycle was finished with 4.6k brick run where we all learnt the route so we could do this on our own after each ride. A good afternoon to break us in… 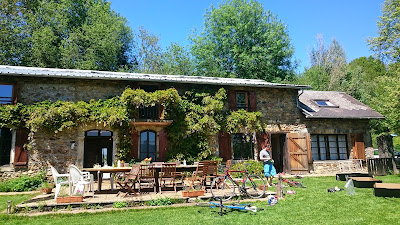 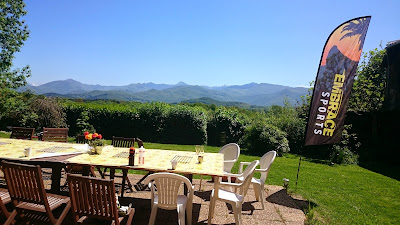 
We started with breakfast and a bike 101, which I very much needed! Teaching us bike maintenance, how to clean it after sessions, which lubes to use depending on conditions and most importantly how to change a puncture tyre. 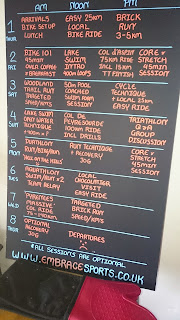 We then set off to the lake for my first open water swim session, after a briefing everyone shot off across the lake to the rock and back (370m). I seemed to have a bit of a panic attack. I just couldn’t control my breathing, Eric was very good coaching me through it and I finally managed to get my stroke under control. My wetsuit worked well I didn’t feel cold even though it was only 13 degrees c, it was just the breathing in the cold water that I struggled to get my breathe under control. The lake was beautifully clean though and I even spotted  few  fish! My first open water swim experience was most interesting! 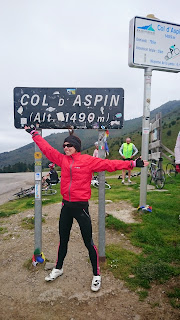 We then finished the ride with our lap of the brick run and a core class. Then a feast on a homemade bbq! 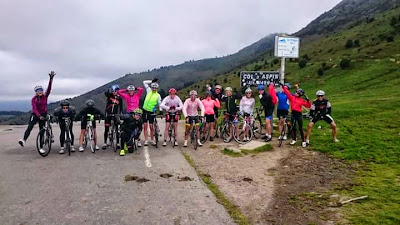 
Bike 202! Over breakfast we learnt the basics of riding in a group and tactics up and down hill.


We then set off to the lake again for some more swimming.  I think I was even worse, it was colder and I was still struggling to breathe. Managed two laps in a mix of front crawl and breast stroke, still finding it hard to put my head under. 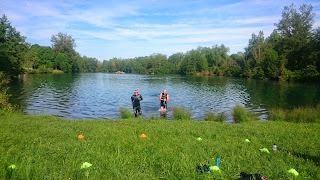 Next a woodland run – a lovely trail run of 6km laps, I aimed to do two but felt so strong (could be to all the great food provided) I managed to complete 3 laps = 18k in a quick 1 hr 21 on trail.  Not bad and the longest I’d run for a while.

We finished the day with some transition practice and an easy 25km cycle. Dinner was at a local restaurant

We left at 9am and the weather was gorgeous. The ride was beautiful through mountains and valleys. We stopped at the famous Tour de France town Luchon at 50km for some coffee. The climb was 15km and we climbed to 1585m. It was hot and tough and took me just over an hour. I also chatted to some French guys as we went up,  as I passed them in the last 2km they shouted “You machine, you machine!”, which gave me the encouragement to do a  little sprint finish. Apparently, they climb that mountain every other week. My cycling could get so strong if I had that option! We then finished the ride by descending the other side of the mountain; totaling 105km in the 26 degree heat. I found it a pretty tough but persevered as to complete the 4.6km brick run. Everyone else was popping on their trainers so I felt obliged!  We returned to the farmhouse about 4pm and chilled by the pool. 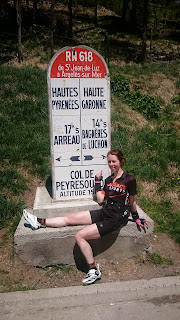 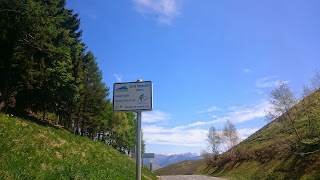 We were all pretty knackered by the end of this day, dinner was a lovely feast of homemade thai green curry, vegetable curry, peanut chicken and salad followed by ice cream. Amazing, I must get all their the recipes! 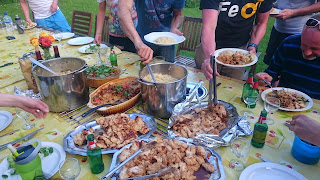 A 5km trail run, 24km cycle, 5km trail run. I really enjoyed this fun event, it gave me a chance to practise my transitions and I achieved a  negative split on the run. The bike was a TT course and in the blistering heat it was tough, but I felt my competitive side kick in and over took Sarah on the last run to be the first lady home!

This was followed by a cooling lake swim - with the weather much warmer I managed 4 laps of the lake. I was more relaxed and quite enjoyed it!

We then finished the day with a Q and A on triathlon and a core class with Kat which was a great end to a fab day.  Dinner  was then a delicious homemade  French beef stew, salad and potatoes (a healthy version of the dolpinaise potatoes  with crème fresh, asparagus, spices and carrots). Yum! 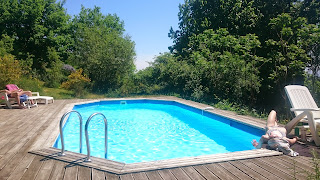 
Not my favourite day, we started with a sunny 15k ride down to the lake and pulled our partners out a hat. I was glad to be paired with Millie a strong swimmer and runner, the event was a tag style, person 1 swims 400m and then changes out their wetsuit as quick as possible, puts on their running shoes and runs a mile lap before tagging their partner. This is then repeated so we both go twice.  I opted to go first thinking its best to get it done! For some reason in the rush and swim, I just completely lost my breathe couldn’t breathe and thought I was going to drown! As the others speed off I panicked, I just couldn’t get my breathe. Luckily one of the coaches spotted me waving in panic and charged into the lake (no wetsuit!) and calmed me down. I pulled it together and managed to swim the rest of the lap. I then pulled the wetsuit off as quick as possible and charged off onto the run which felt strange in my swimsuit! I managed to catch a few and tagged Millie who caught the rest of the group! Second round went was much better, I was slow but didn’t stop, progress! 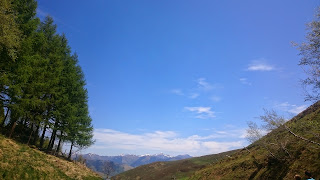 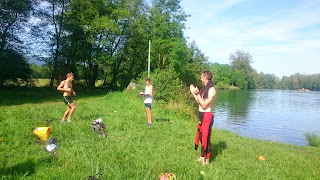 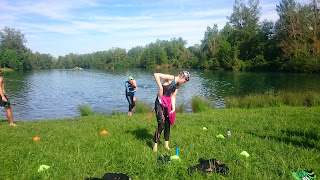 We then cycled the next 15km back to the farm house for some well needed R and R and a trip to the chocolatier. We cycled their without our lycra! The chocolates were amazing and it was very interesting to see how they were made. Buying a few treats, we then headed back for some sun, reading and writing by the pool as well as getting our bikes ready for a mammoth ride tomorrow! 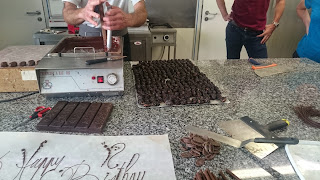 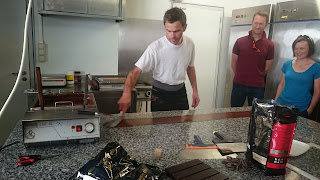 
This was an epic last day, we set off bright and early in the hope that the weather wouldn’t be too hot when we climbed Tourmalet. The ride planned consisted of the epic Col du Touramlet famous in the Tour de France, a 17.5km climb with an average gradient of 9.9% eek! With an added climb up the other side of Col d’Aspin and a valley ride home.   The first 30k of the ride wasn’t the flattest going over  a couple of 2-3km climbs, then 10km with a 1% up hill gradient to the bottom of Tourmalet. From what I remember the climb itself was tough but with beautiful views and scenery. I followed a very hairy wild donkey for a while at the start which distracted me! We cycled through the French ski resort La Mongie without a stop before the last 5km to the top. The group had opened out and it was just you grinding up the hill against the mountain at a depressingly slow average pace of 6mph. The climb took me 1:47 minutes and its funny how you completely zone out and think about random things like old jokes, the words of a song and I tried to calculate random sums concerning speeds and the minutes left I would be climbing in my head! As you climb higher, you start to see snow at the side of the roads which is surreal considering your body heat is so hot, I was tempted to rock off the side of my bike and fly in the snow piles, I had to take a gel half way through the climb my legs were drained, it made such a difference and I felt quite strong up the last km, reading all the names of the famous cyclists in the road is pretty cool, someone had written “shut up legs” in the last km which made me chuckle! Upon reaching the top the views were astounding and it was such a great feeling of accomplishment. You then suddenly feel rather cold and after a few quick photos, I layered up and started the challenge of the steep and long descent! 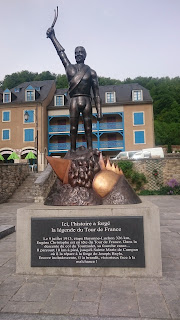 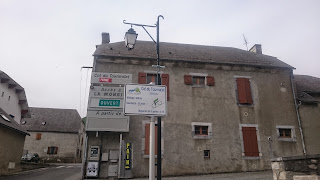 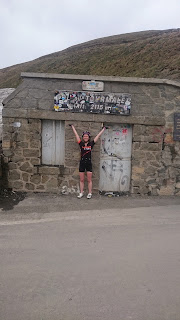 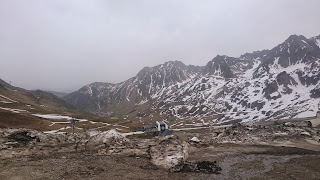 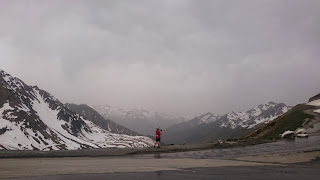 The rest of the ride consisted of another hard climb up Col’d Aspin, our legs were really feeling it now but the coaches were so encouraging. We also stopped at some shops to refuel, I grabbed a bounty bar and some Haribo, nom nom… 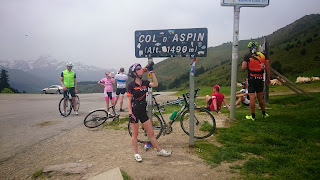 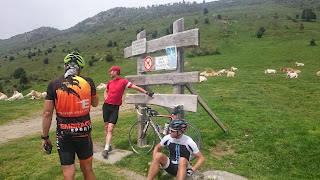 It’s crazy how much you need to eat on these rides!   The valley ride home was flat and the coaches were great letting us draft during the tough head winds. Once returning we all went for the routine brick run and collapsed back at the farm house. Time for a quick shower, some well-earned bubbly and a slide show to laugh at a collection of photos the guys had taken during the week.


Dinner was a elegant 3 course meal and wine at a restaurant down the road. It was sad, we were all saying our goodbyes, yet celebrating our amazing achievement of the day. Everyone in the group got on so well and we all had good banter between us. I absolutely loved the holiday and encourage anyone, whatever training level to go. As well as great training, it was relaxing and fun. As soon as I can I will be booking next years with Embrace sports and cannot wait for the season to start….