My first 70.3 - Weymouth Race Review
I entered Weymouth back in November 2016, having had a whole a year off racing (mainly duathlons) due to a severe injury. I entered Weymouth as a personal challenge, rather than a race; the distance scared me which is why it appealed. Training had been a little inconsistent in the run up to the event with a flare up of my hip and then a bout of food poisoning which lasted a week, so I didn’t feel the most prepared.


This was my first Ironman branded event, and to give them credit, they do it very well. We arrived in Weymouth on the Saturday morning and I was impressed that there were no queues to register or rack. The sea looked calm (not for long!)  and I was excited but anxious to start the race. 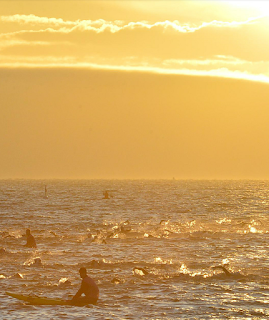 Race day morning was cold and dark, but I made my way to the start with my head torch on. Within a couple of hours the sun was coming up over the sea and the pros were entering the water. I did a quick warm up, the sea was cold (16 degrees) and very choppy, nothing like the calm, warm(ish) sea I'd recced a few weeks before. I then returned to the start queue with 2600 other athletes, going with the 37min swimmers as I predicted a time of 40ish minutes. It was cold waiting, and I started to regret getting in the sea before!


Standing at the start with the sun coming up I reflect on how lucky I was to be on the start line and to have the support from friends and family. I was also very grateful my Mum had come with me to cheer me on. I started getting excited to start the fun part, the race!


The swim can only be described as a washing machine, it was choppy and hard work. The sun was coming up which though very pretty, made sighting a bit tricky. I panicked a few times and I reverted to breaststroke which disappointed me as I knew I could swim the distance, but I was struggling to catch my breath. I emerged feeling very sea sick and cold. However, the spectators, commentator and the crowd as I ran to T1 were amazing!

T1 was a disaster; I think I hold the record for the longest T1 - 13mins 48! Yes, it’s a fairly long run but the problem started when I couldn’t find my bag, it had fallen off its peg, but in the panic, I was sure someone had taken in and charged around the tent. When I eventually found the bag, I was so cold it took me a while to find my bike gear, add some warmer layers and put on my socks. I still don’t understand how it took me 14mins! 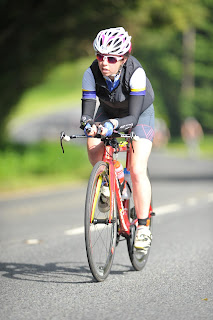 The bike course is stunning, its undulating with a couple of larger hills. It starts with a long incline which was good for me as I started to warm up and over take a fair few competitors. I was feeling sick from the swim and couldn’t take on any nutrition or water, which was worrying me slightly. As the bike went on and I warmed up I started to really enjoy it, which helped me continue to work my way up through the field, but I knew I had to hold myself back a little as there was still a half marathon to run. The roads were fantastic, being some of the smoothest I’ve ridden in the UK. There’s a large steep hill at mile 38 which is worth knowing about, just after this I had slight gastro problem and after a quick stop I was off again. I then noticed as my feet warmed up I had only put one sock on! Luckily, I had put a fresh pair in my run bag.  As I came into T2, I managed a couple of jelly babies and a glug of water - and hoped I would get around the half marathon.


T2 was much smoother and with a clean pair of socks and a quick toilet stop I was ready to go. I surprised myself; I felt great! The run is a pan flat 3.5laps along the sea front, which mentally I quite liked. The route is lined by crowds the whole way (apart from about half a km at the end of one lap), which really helped. The sun was out and people were cheering, and telling me I was making it look easy (not sure it felt easy!), and at 10km I finally managed to take on a gel. I was happily sticking at a 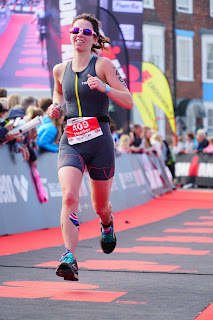 pace 4:30-4:45km which was quicker than the plan but I felt good. At 16km doubts started to creep in as this was my longest run for a couple of years, however, with one lap left I held onto the pace and was ecstatic to get onto the iconic Ironman carpet and finish shoot. The feeling coming over line was a mixture of emotion - pleasure, happiness and relief. I had not only completed my challenge but also in a quicker time than I thought. I really enjoyed the challenge of the distance and the variety of training more than duathlons. The organisation, volunteers, crowds and atmosphere in Weymouth were just fantastic, and have left me eager to sign up for my next one! 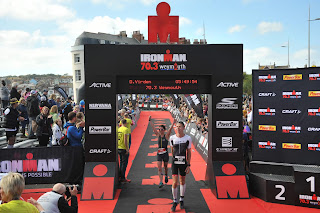 Would I recommend the race to others? Yes definitely for beginners and experienced athletes. With a hilly bike and flat run it’s a great course.


So what have I learnt from this race:

If you entered I’d like to hear how you found the race so please leave a comment below.