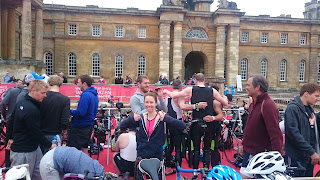 Blenheim was my third sprint triathlon and after a good open water swimming session with my coach a few days before, I felt fully prepared (or so I thought). I met my friend Sean in the drizzle with high spirits and went into the beautiful palace court yards to where our transition area will be. Bikes racked and wetsuits on, we picked up our swim hats and headed down to the lake. With a motivating briefing (we had to hug the person next to you and cheer), I was pumped up and ready to go!


A new type of ‘start’ for me; you had to jump off a pontoon into the lake, swim 100m to the centre of the lake and tread water for a few minutes before starting.  I jumped in at the front (not realising how many people were in my wave), which gave me time to acclimatise to the cold. However I had to bob around for a while and as the lake was only around 15degrees I started to get a little chilly.

The whistle went and I went into a steady front crawl for the first 100m. Suddenly the rush of a hundred or so other quick and stronger swimmers charged passed/over me pushing me out to the side and off course! They just kept coming and I lost my rhythm, struggling the rest of the way which was disappointing! Once being hauled out the water by very helpful volunteers, I jogged up a pretty steep hill for about half a km to transition. Passing Sean on the run (he later told me he fell over and hurt his toe exiting the water), T1 was quick. The wetsuit slipped off easily using the Vaseline trick and I avoided the temptation of drying my feet...


The bike course was fantastic; closed roads, beautiful settings, a fair few hills and the sun came out. I felt like I was flying, overtaking a fair few competitions and even having to shout out a few to move out the way!

After three laps and with a smooth transition, I ran to rack my bike. But I could not find my trainers, and jogged up and down with my bike like a headless chicken! I finally spotted my pink towel and trainers and set off on the run. 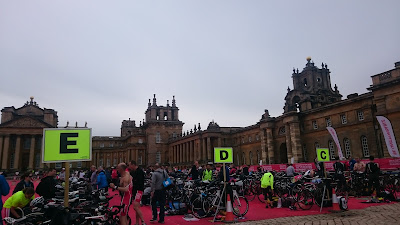 
The run consisted of a 5.6km (two laps) race; a quick downhill and then a long uphill around the lake. My left leg kept cramping which is strange, and I put it down to the extra effort up the hills on the bike and not drinking any water (silly move!). With a last sprint to the finish I was very pleased to receive my finishers medal! I saw Sean on the last lap of his bike as I was going into the second lap of my run so having crossed the finish line, I cheered him to the finish. 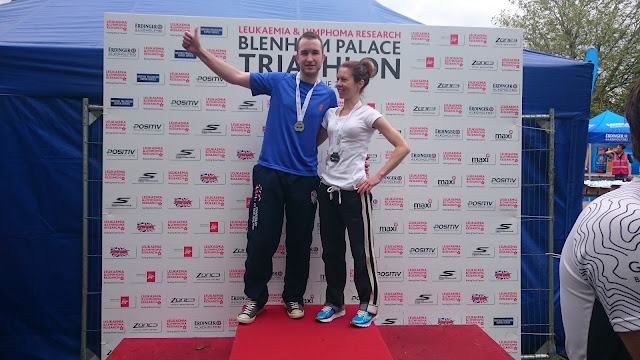 I was slower in the run than at Hyde Park but was pleased to find I got the 3rd quickest bike and run time for women overall, 10th lady and 3rd in my age group with over 1200 women. I'm pretty chuffed as I have put in a lot of work to improve my cycling and Dan’s training programmes are clearly working!

I encourage all ages and levels to give triathlons a try; it really is a sport everyone can enjoy. Especially when you pick a beautiful setting like Blenheim to race in.

Here’s what I have learnt in my first three triathlons, which I hope help you avoid the mistakes I made!

Beginners Tips for your first Triathlon;


1. Practice an open water swim in a wetsuit as much as possible before the event, and if you have time acclimatise in the water (dunk your head under and try and breathe out under water).
﻿
﻿
﻿
﻿ ﻿ ﻿

2. Practice transitions; you can save minutes on a smooth transition and always make sure you have your helmet on before touching the bike!


3. Look for signs/marker to memorise where you rack your bike and remember the row number. Take a bright towel to place your trainers on so you can spot it on return from bike. 4. Wear goggles under your swim hat, not over! This stops other competitors knocking them off in the scrabble! Also spit in your goggles before racing this stops them fogging up.


5. Apply Vaseline on your inner wrists, ankles and neck to stop your wetsuit rubbing. Also apply onto the outside of your wetsuit up from your ankles to knees and wrists to elbows to help it easily slide off.


6. As you exit the water, open the neck of your wetsuit to let the water gush out (this makes it easier to take the top half off when running).


7. Don't dry your feet or bother wearing socks when getting on your bike, your feet will dry on the bike (saving a lot of time).


8. Take water on the bike (this may seem simple but I have forgotten this before and forgotten to drink if I have taken it! Dehydration will not only be detrimental for your run but will also slow down your recovery time after the race).


9. Practice drinking on the bike and how much you drink. I can only sip a small amount regularly or I get a stich on the run!


10.Use elastic laces, when your adrenaline is high and you've leapt of the bike, tying laces is impossible.

11. Save some energy for a sprint finish and enjoy the race, smile at the crowds and if the race is at Blenheim, you’re encouraged to high five the spectators on your run in, which makes you feel pretty cool J 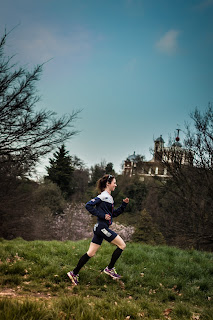 ITU World Triathlon - a novice having a go! Race report...


This was my first, large triathlon and I couldn’t believe how big the event was, with over 1000 competitors in my race – Sprint (750m swim, 22k bike, 5k run). The site at Hyde Park was huge with a large spectator stand (to watch the pros the next day ) and an a Expo selling anything and everything triathlon related. I turned up at 2:30pm (my race wasn’t until 4pm, which isn’t great as for me as I like to get up early and go) but at least the sun was out and there were no rain clouds! I met Juliet, my friend who was competing too and we got to work attaching all our stickers and sorting all our gear. Being in the centre of London I cycled to the event (this was a good warm up, but meant I had limited equipment, all squashed in my back pack).
﻿﻿ The transition area was well labelled and we set our bikes up, getting nervous as some very serious competitors had started appearing! We applied our body glide and struggled into our wetsuits. As we stood chatting and having a few pre race pics,  we suddenly realised our wave had lined up by the water. Charging over, trying to put on our swim caps and googles as we ran, we didn’t feel very prepared. Juliet also still had her flip flops on, and I don’t think she ever saw them again! We also noticed that we were possibly the only two woman in our wave…


The marshals then told us to enter the uninviting Serpentine. It was a mere 15 degrees celsius and I heard a lot of gasping and moaning from the men as they entered, man up men! I was nervous by how far away the buoys were, this swim looked very daunting and dunking my head to acclimatise, the water was very murky. Vision; poor.  Holding onto the pontoon for over 5 minutes I started getting chilly, plus my arm was aching! The horn blew and we set off, having never done a mass start this scared me and I slowed to the back as the kicking and splashing was making me panic, I then settled into a rhythm; a mixture of breast stroke and front crawl, not the best but at least my head went underwater this time and by 400m in, I was pleased to maintain my front crawl (except when I got kicked!) The swim seemed to go on forever (which it did for me as my time was slow). The run from the swim to the bike was long about 800m, but this was all carpeted so nice on the feet! Juliet had a fantastic swim, she was off like a shot and one of the top competitors out the water.


T1 was a disaster! As I got to my bike, I dried my feet (I know not to do this now, just the thought of wet feet on the bike!) and started the run with my bike to mount. During this run,  a guy decided to throw his wet suit right in front of my bike. Comically, I then tripped over the wetsuit, fell over and wasted time re fixing my shoe to the bike. He got penalised by 2 minutes but this just slowed me down! 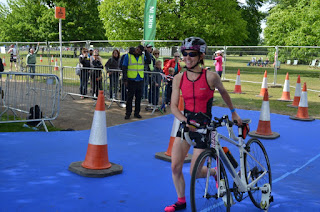 The bike course was fantastic, 3 laps, fairly flat and lots of tight technical corners and I grew more confident with each lap. With the closed roads I felt I was flying round and overtaking competitors as I went, finally all those hours sweating it out on the Watt Bike over the winter have started to pay off. I also caught Juliet in the fourth lap just at the end so that spurred me o 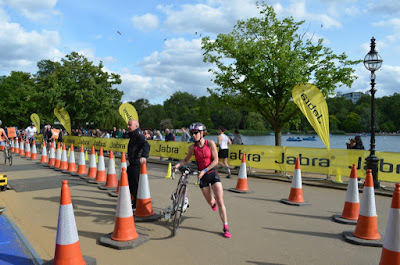 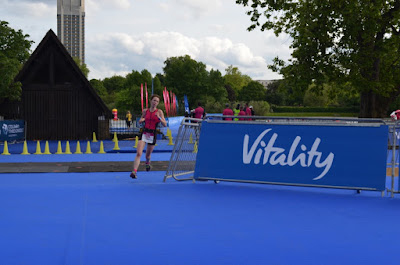 T2 was fairly smooth and the run was two laps around the Serpentine. My legs felt tired on the first lap and I thought I was running very slowly. Lap two - I picked up the pace and started overtaking, coming to the finish there was a great crowd. I’ve never had such an exciting finish with the spectator stand and the speaker calling my name saying I was in the top 10 woman and I sprinted to the end. Having received my results, I am so pleased 7th Lady of the day, 3rd in Age Group and the fasted lady runner of the day. My run was 19th overall (this includes all the men!) I just wanted to finish and am thrilled with these results and my 5k time. If I could just speed up my swim I wouldn’t have to spend the whole race chasing! 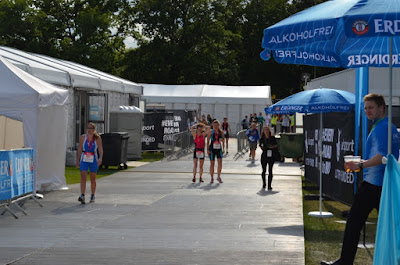 I now think I have the triathlon bug and can’t wait for Blenheim next week. This was one of the best organised and most enjoyable races I’ve done and I recommend it to other novices for next year! I’d also like to thank Juliet for being such a great race buddy and Jo for his fantastic cheering on the side lines and photos.