Taking on my first season racing…the highs and the lows. 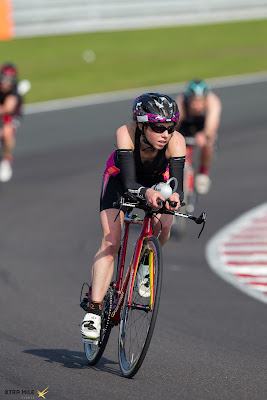 The last month has been very up and down. This has been my first proper “season” of racing, rather than enter a mixture of random events at any time in the year. A month ago I felt great, I was reaching all my running splits (for once!) and hitting my watts on the bike. The last two races I pb’d on my road bike. I was then lucky enough to finally get my hands on a TT bike from an old friend and great cyclist, Pip, two weeks before Nationals. On my first ride, I fell off (it’s a completely different ride) but this was pretty much at standstill, which was quite comical to see! I then took the bike out on a group ride the next day, and managed to break the rear hanger. Taking it back to the bike shop I had to wait a week for it to be fixed, leaving me only a few days before a race with only one ride on a TT bike! . I planned to use the race  as a practice for Worlds, getting used to the bike and practising nutrition and pacing.


Oulton Park was my first ever full duathlon that I entered, this time last year. Last year I had a standard road bike and wore a long sleeved t shirt and leggings! Today it was the practice race for Worlds, and so much has changed.  As we lined up I felt very nervous I hadn’t raced this distance since April and though I knew I was fit enough, I always question myself. The whistle went and I charged off forgetting this was a practice race and going into full competitive mode. The first run was quick, 2:30mins quicker than last year.
My transition was fairly smooth and on the new bike, I felt like I was flying. I kept waiting to be overtaken by a mass of girls (as this is what normally happens) but they didn’t come. I knocked off 12 minutes on the bike from last year! When I dismounted though something was wrong I couldn’t put any weight on my right leg, spasms were shooting down it with agonising pain. I kept running thinking it would wear off it could be cramp. I got through the run, hobbling over the finish. I finished 1st in my Age Group which was an incredible result considering my last run, I also knocked off 15 minutes from my time last year! I should have been over the moon but I was just worried about my leg with just 2 weeks until Worlds. 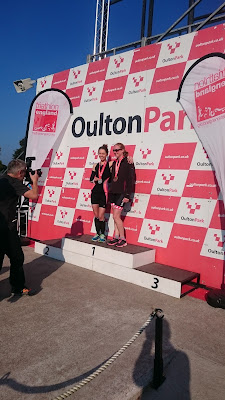 Saturday before the race I did my normal taper session and went to run, the pain was horrific I just couldn’t put weight on the leg. I managed 3 minutes at a ridiculous 7km/hr on the treadmill. Crying my eyes out I knew I couldn’t race, do I go for a DNF or a DNS? Leda found me at breakfast and gave me one last intense session to release the adductors. Jez, the team manager swapped my race for me dropping me down to the sprint (which meant less running) the plan was to finish the race no matter what. That meant I could walk the 5km and 2.5km run, then at least enjoy the bike course and the closed roads and have a taster  for racing internationally. That evening I was so depressed, I should have been excited and nervous and ready to race rather than coming to terms with the fact that I just needed to get through the race and would be the slowest. I would have to watch other competitors that I know I can beat run past me. Mentally this was going to be a very tough challenge. Mum even offered to walk with me which could have been quite funny at a world championship final!


The bikes had been racked the day before, and I woke up early for some Ibuprofen and paracetamol and a few rice cakes to line the stomach! My name was now Helen (as I had swapped places). 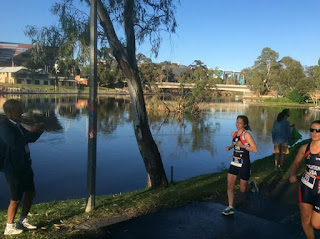 As the whistle went, I started running, ouch this was going to hurt, and was pleased to get through the first 5k, (about 5 minutes slower than normal) but surprisingly not last! With a very unsmooth transition I headed onto the bike course where I started overtaking, 1, 2 , 3 girls, I climbed my way up to 8th position and this was with a slight detour missing the lap turning and having to back up. It didn’t matter, I laughed it off, what else could go wrong?! On dismount I had that pain again and I held onto the bike to hold me up through transition, I then hobbled out on the last run. This was going to be slow and painful, I can’t believe how long it took me but I got through it and was very relieved to see the finish line. I grabbed a GB flag and made it across the line feeling relieved and happy. I found out I was 15th (not bad), but more importantly I had taken part in a World Championship, something I may never do again. I avoided a dreaded DNF. I then found out Claire had won gold and was so happy for her, she’s an incredible and motivated athlete and, like me, only started this year.  We met at these Championships and have had a really good time, with so much in common I am sure we will remain good friends! 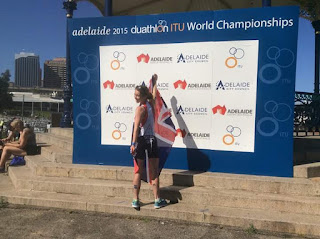 I have to look at the positives I from this; I competed at a World Championships with a horrific injury and I still came 15th, I made some great friends on the team and so pleased to have been part of it. I want to thank them for all their support out there and congratulations on all your fantastic performances, you all did amazingly. 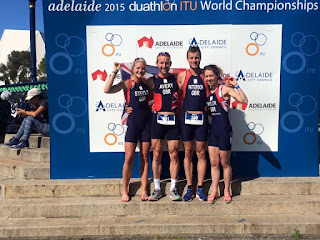 ﻿﻿
Now I have to come to terms with this injury, I have an MRI booked now I’m back and I have to rest and get fixed so I can hopefully be back next year for Europeans.  This rest is killing me, being so active before, I just want to run and bike. Looking back I’ve had a pretty phenomenal first season, I’ve competed in my first triathlons (taught myself to swim last year) and have been placed in each (though I’m still always last out the water). Overall, I have been placed in 12 out of 14 races this year, including my first ever British and National Champs, all thanks to Dan Sims and his help with my training and race advice! Worlds is unfinished business, and one day I will get back to this fitness level and race again, nothing beats that feeling of crossing the line in your GB gear waving a flag and having the crowds shout your name!


So I put together a few pointers of things I have learnt from my first season;


1.       I love racing and enjoying the training just as much, if not more. Someone once told me the race is the dessert but  the training is the main course!


2.       Race your own race, don’t let others intimidate you and pace yourself.


3.       Rest days are key, even if you feel like you don’t need one a rest day every week or 10 days is crucial to prevent injury and to allow your muscles to adapt and respond to stressors. Good sleep patterns and sports massages are also important and are regularly forgotten.


4.       Have a training plan and programme – a periodization programme is good to ensure you incororate all important aspects of training including recovery.


5.       Listen to your body if you feel tired or a twinge don’t be afraid to miss the odd training session it won’t reduce your fitness (even if you worry that you will!).


6.       Always refuel after a hard training session with adequate protein and carbohydrates to reduce your risk of injury and put you in the best form for your next training session. Having a well-balanced diet is also important to ensure you consume adequate calcium and vitamin D for bone health. I  take vitamin D weekly to keep this topped up, especially during the winter months when I’m working inside.


7.       Plan your race day, practice nutrition, regularly check your bike, practice transitions and try and cycle the bike routes so you know what to expect.


8.       Learn to change a puncture quickly – I have yet to have one yet but feel this would be a useful skill and prevent any further DNFs!


Thanks for reading…watch this space!
Posted by Unknown at 11:49 No comments: