The fast few weeks have been extremely busy so apologies for lack of posts, I've taken part in London Ride 100, Bewl Water Sprint Triathlon and was lucky enough to go on a training weekend with Olympic triathlete Helen Jenkins which was an amazing experience. So where to start:

London Ride 100 was an incredible experience. I had a hard training week leading up to it, with the World Champs now being my main focus at the moment so there was no need to taper. I wanted to keep my Duathlon training up. I was then a little worried, realising 100 miles is a very long way. 80 miles being my max distance so far. We left at 5:40am scoffing down some peanut butter, rice cakes and banana before leaving. Everyone has their preferred pre ride/race meal. I struggle with cereal as the yogurt and milk makes me feel queasy cycling. The theory is peanut butter (high in good fats and protein gives you a slow release energy, keeping you feeling full), rice cakes (good carbs for energy but also wholegrain so a slow release on long rides) and the banana for instant energy and potassium to prevent cramps! 8 miles cycling to the start and we were in our pens ready to go! We met the other two in our San Fairy Anne team there. 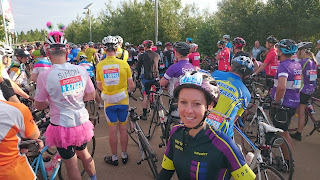 The closed roads and crowds were great, very encouraging and the first 30 miles flew by! Chatting to cyclists and hanging on the back of different pelotons was great fun! I lost the team after Leith Hill which was a 10 minute battle trying to get past others on the narrow roads, with many people walking which was disappointing. It was a tough hill but 10 mins of steep climbing and you were at the top!  Box Hill was very enjoyable with a beautiful smooth road and an easy gradient up. The last 40miles I was on my own and at mile 75 my belly started rumbling. As a cyclist this is not a good sign, it means that I was soon going to run out of energy and “bonk/hit the wall”. To keep your energy levels up and performance at its peak science suggests we should have 0.5-1g of carbs per kg each hour. With all the excitement I had forgotten to eat enough and so refuelled at Hub 3, bananas, flapjacks and good old fig rolls! This perked me up for the last 25miles and I even had a sprint finish, which was quickly halted by an ambulance with a casualty at the finish line….


I therefore included some tips for long rides below;


1.    Eat little and often.  Set a timer to remind you to eat if necessary.  Eat even if you are not hungry, when your hungry its too late..


3.    Try to drink at least every 15 minutes to hydrate and prevent cramps.

Now its just putting this into practice on the next ride!
I was very pleased with a quicker than expected time of 5:30hrs (maybe I could have been quicker if I ate more regularly!) 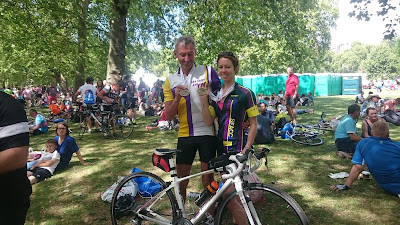 The ride home was not so enjoyable, it was hot and the crowds made leaving the park take forever. The next 8miles back to Greenwich was slow and frustrating with my goody bag on my back and traffic slowing us down. We got through it and stopped for a well-earned drink round the corner from home. The wine hit me pretty quickly! Two sodas were needed to water it down...


In summary the event was a fantastic experience,  the crowds and closed roads were amazing, it was very well organised and I recommend it. Overall we cycled 117miles that day, this gave me a taste for an Ironman….. (so watch this space!) 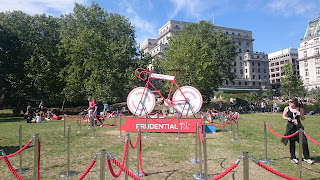 I would also like to give a shout out to our friend Shaun who finished Ride 100 in a decent time and on a Brompton Bike for charity. Now that’s impressive!


6 days on I then entered a local triathlon Bewl water. I didn't feel too prepared as it had been a while since an open water swim. The start was an early 7am so it wasn't too warm either at this time. The swim was delayed 30 min due to fog on the water and as I had already warmed up in the water and then got out again this wasn't the best start! My swim was even slower than previously.  I was in a woman's wave (which I advise beginners to be in as there's less kicking and shoving!) it just seemed very long and I couldn't get into a rhythm. Upon leaving the water there was a  long up hill run and I somehow cut my foot on the rocks. I ignored it and ploughed on, the bike was lovely well-suited to me;  undulating and I caught up with a few girls. The run was hilly with some steps thrown in! Not my quickest run but I pulled it back and was super pleased with an age group win :). A lovely surprise and confidence booster! Considering I was pretty tired from a hard training block!


Now to ditch the swim training and get ready for the big event of the year Duathlon World Champs….